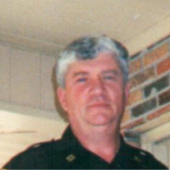 Forrest L. (Randy) Boyd, 68 of Beaver, passed away Friday, August 31, 2018.
Born June 28, 1950 in Beckley, he was the son of the late Forrest V. and Thelma Williams Boyd. In addition to his parents he was preceded in death by a brother James Edwin Boyd.
Randy was a former Captain with the Beckley Police Department retiring in 2000 after 28 years of service. He was also the owner of Phoenix Investigations, worked as a Postal Inspector in the Workers Compensation Division and later worked as an evidence custodian for the Beckley Police Department. He held a B.A. in Criminal Justice and attended the FBI Academy.
He is survived by his wife, JoAnn Hicks Boyd; son, Randall Boyd and wife Wendy of Beckley and their children, Gretchen and Audrey; daughter, Savannah Workman Boyd of Beaver and her son, August Lawrence; step-daughter Alisha L. Moss of Beaver and step-son Randy Wayne Moss and wife Cyndi of Daniels and their children, Trevor and Jaydn.
Services will be 1 PM Monday, September 3, 2018 in the Calfee Funeral Home Chapel with Dr. Jonathan Rinker officiating. Burial will follow in Calfee Cemetery. Friends may visit with the family one hour prior to service on Monday.
Pallbearers will be Chad Lilly, Morgan Bragg, Eddie Boyd, Jason Hicks, Matthew Hicks and Alan Harper.
The family requests that in lieu of flowers memorial contributions be made to Crow Christian Church, P.O. Box 714, Beaver, WV 25813 or Hospice of Southern West Virginia, P.O. Box 1472, Beckley, WV 25802.

Arrangements by Calfee Funeral Home.
To order memorial trees or send flowers to the family in memory of Forrest Randy Boyd, please visit our flower store.