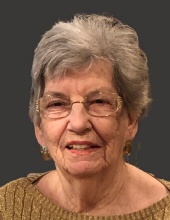 Eunice (Riffe) Canaday Deck, 88 years young, got her angel wings on Wednesday, November 3, 2021 following a long battle with dementia. She was a lifelong resident of Crab Orchard, WV and lived the last 2 years of her life at the Rockin Chair in Lerona, WV.
Born in Crab Orchard on October 22, 1933 along with her twin brother, the late Ewell Riffe, she was the daughter of the late Virgil and Gay (Harper) Riffe.
Eunice was a loving mother, grandmother, sister, aunt, cousin, friend and wife. She had a heart of gold - always putting others before herself and she was usually the “first responder” whenever anyone she cared about needed help. She was a spunky woman who wouldn’t hesitate to voice her opinion - and quite often in entertaining ways. Eunice was a spirited lady who loved to laugh, and had a sense of humor that never rested. She took great pleasure in playing pranks, which is clearly a hereditary trait passed down through the generations by both of her parents’ families.
Eunice is preceded in death by her parents; her husband, Lowell Canaday; granddaughter Kayla Fitzhugh;3 brothers, Bernard, Dallas and Ewell; and Elliott Deck. Survivors include 2 daughters, Drema (Canaday) Fitzhugh and Diane Canaday Hesse; 1 son, Lowell (Eddie) Canaday, Jr.; 3 sons-in-law, Fred Fitzhugh, Dan Hesse and Eddy Gamson; 3 grandchildren, Derek Fitzhugh (fiance’ Shelli Kahler), Ryan Hesse (wife Daryl Hesse) and Evan Hesse; 2 brothers and sisters-in-law, Dennis & Betty Riffe and Donald & Juanita Riffe; and cousins, nieces and nephews whom she loved dearly.
Eunice was a longtime member of the Crab Orchard Baptist Church and was passionate about singing in the choir. Her top priority was raising and being there for her children. She was a bible school teacher, classroom parent, “team mom” for every sport or activity and biggest cheerleader for anything in which her children were involved. She loved to play games (cornhole and Rummikub being her favorites), and really looked forward to her card games with her cousins and brothers, and the feisty Canasta games with her sister-in-law Margaret and her niece Donna. She took great pride in exhibiting her impeccable athletic prowess at softball, volleyball, golf and bowling.
In lieu of flowers, the family requests donations be made to the WVU Rockefeller Neuroscience Institute to support Alzheimer’s research (2R411): WVU Foundation, Attn: Laura McCall, PO Box 1650, Morgantown, WV 26507 or contact Laura at (304)293-5757. Please indicate that your donation is in memory of Eunice Canaday Deck.
The funeral will be held at the Crab Orchard Baptist Church on Saturday, November 20, 2021. Visitation will start at 1:00 pm, and the funeral will begin at 2:00 pm, with Pastor David Bush officiating. A meal will be served at the celebration of life in the activity center immediately following the service. The service will also be streamed on Facebook at www.facebook.com/Crab-Orchard-Baptist-Church-Memorial-Service-Page-106216561387827/posts.
Online condolences may be left at www.calfeefh.com.
Arrangements by Calfee Funeral Home.
To order memorial trees or send flowers to the family in memory of Eunice (Riffe) Canaday Deck, please visit our flower store.