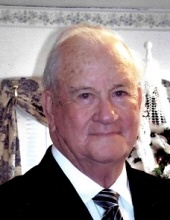 Eugene “Spot” Leach, 92, of Shady Spring passed away Sunday, February 2, 2020.
Born August 26, 1927 in Monroe County, he was the son of the late Arthur Johnson and Lydia Lynch Leach.
Mr. Leach spent his childhood in Monroe County. He was a graduate of Union High School and attended Greenbrier Military School. He played professional baseball with the Braves organization for several years as a pitcher. He was a U.S. Army veteran of the Korean Conflict serving in Germany. He played baseball for several years in the old Raleigh County League. He was elected to the Union High School Hall of Fame. He was also selected as one of Monroe County’s sports greats in 1963 by West Virginia Lions International District 29. He was an avid golfer. Spot retired from C&P Telephone Co in 1988 after 35 years of service.
In addition to his parents he was preceded in death by brothers, James Roswell, William Arthur, Paul Emerson and Samuel N. and sisters, Eva Leach and Helen Canterbury.
Survivors include his wife of 69 years, Yvonne Helm Leach; sons, E. Stephen Leach of Fairmont, WV and his daughter Louisa Pammer Leach and Jeffrey D. Leach and his wife Becky of Beckley; grandson, Lucas Pammer as well as numerous nieces and nephews.
Services will be 10:30 a.m. Wednesday, February 5, 2020 in the Calfee Funeral Home Chapel with Rev. Don Snyder officiating. Entombment will follow in Sunset Memorial Park. Friends may visit with the family from 5-7 p.m. Tuesday at the funeral home.
Pallbearers will be Mike Vaughan, Mark Tredway, Gary Rogar, Danny Quesenberry, Randy Scott, Sam Corey, Tom Brown and Butch Freeman. Honorary pallbearers will be Joel Shumate and Mike Mays.
The family suggests that in lieu of flowers memorial contributions in Spot’s memory be made to the Memorial Fund at First Christian Church, P.O. Box 5556, Beckley, WV 25801.
Online condolences may be left at www.calfeefh.com.
Arrangements by Calfee Funeral Home.
To order memorial trees or send flowers to the family in memory of Eugene "Spot" Leach, please visit our flower store.