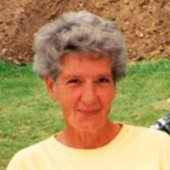 Elsie Marie “Bush” Weese, 87, of Midway, WV, passed away Tuesday, September 27, 2016 at her residence. Born November 28, 1928 in Tanner, WV, she was the daughter of the late Ernest L. and Hester Viola Bush. In addition to her parents, Marie was preceded in death by her brothers, David, Ernest, Jr., Charles and Porter and a sister, Marjorie Mathess.

Marie was a homemaker and took great pride in caring for her family. She was very involved in the community being a Den Mother for the Sophia Cub Scouts and a former officer of Modern Woodman of America. In her free time Marie enjoyed gardening, crotchet, knitting, quilting and other crafts.

Funeral services will be 10:00 a.m., Saturday, October 1, 2016 at Calfee funeral Home, Beckley with Pastor Richard Walker officiating. Burial will follow in the Nobe Cemetery in Nobe, WV. Friends may visit with the family one hour prior to the service Saturday.

Flowers are appreciated but the family suggests memorial contributions be made to Hospice of Southern West Virginia, P.O. Box 1472, Beckley, WV 25802