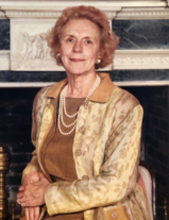 home after a long illness. She was devoted to her family and church. She is the

Born in New Jersey, 26 July 1930, Betty was raised by parents who nurtured her

love of culture and books. An only child, she grew up in Irvington NJ,

surrounded by many cousins and dogs. They spent summers at the shore and

she fondly remembered large family picnics, singing together, and long walks on

the wide white sandy beach. Her beloved father Stephen John Lorenz was a

School where he was a member of the Lincoln Law Club. He had arrived in 1903

at age six to Ellis Island immigrating from Poland on the SS Bulgaria. He

survived the Spanish Flu epidemic of 1917, and after WWI was chosen as a law

student to attend the discussions in Paris during the Treaty of Versailles. He

became an expert in labor law, defending the rights of workers.. He nurtured

City to visit museums and the Metropolitan Opera. Each trip would end at the

top of the Empire State Building to view the sunset. He was proud to be an

American and taught Betty the value of freedom and voting, politics and law, as

well as a deep appreciation of her European heritage and Catholic religion. Her

oil painter. After her parents had died in a flu epidemic, Victoria was raised in

traditions while preparing them with English for a new life. Betty’s Aunt Bertha

to one another. These people instilled in her a deep respect for human dignity

and the importance of education. She spoke fondly of these memories in her last

English which led to her great love of literature. In her senior year, she met her

husband-to-be Richard at the theater in Philadelphia. He helped her to her seat.

Pennsylvania, he nursed Betty through a serious bout of pneumonia coming by

train to cure her with the first Sulfa drugs while she was still in college. Richard

his hair off. They married later that year. She worked briefly as an editor’s

assistant at the Ladies Home Journal, which featured their wedding photograph

tossing her bouquet. He returned to West Virginia where they built a life together

in Beckley blessed with three children and his thriving medical practice. Betty’s

intelligence and charm and passion for education was poured into the

community. She founded the Youth Museum of Southern West Virginia in 1974,

New River Park. She and a group of women friends founded a Book Club nearly

25 years ago which met monthly. Betty worked as a boardmember with Sharon

Rockefeller on early efforts to support Public TV and Radio in West Virginia. She

afterschool classroom for such book discussions was in the janitors closet, so she

Chaucer’s medieval english. Her daughter remembers these sessions at Crescent

Grade school. Into her early 80s, she tutored young readers at the Public Library.

gathering donations of clothes, items for needy families, and toys for tots each

Christmas. It is told that she ran up to the steps of the church in joy when she

discovered it upon moving here. She belonged to the Women’s Club Of Beckley

and The Women’s Medical Association for the wives of doctors. Her lifelong

their modernist house in 1962 with architect Donald Stark. Based on a prototype

for an early environmental house designed by The Cambridge Five, she adapted

it to a hillside site plan. This home on Skyline Drive where she lived for 57 years

has always been her pride and joy. Large windows overlook nature and gentle

West Virginia hills. She was blessed to remain at home until the end of her days.

She is survived by her three children: Richard Starr, Jr. , Mark Starr, and

internationally. Her first great grandchild is expected in a few weeks. A

memorial service will follow. St Stephens Episcopal Church was a huge part of