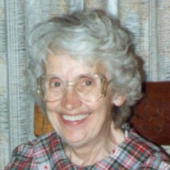 Edna Fay Williams Pettry, 92 years old, entered into eternity on July 30, 2017. She was born on January 10, 1925 to the late Alberta Cook Williams and Walter Williams at Horse Creek, WV. She is preceded in death by her husband, Jesse Pettry; sisters, Doma Tackett and Sylvia Webber and grandson, Charles Scarbro, II.

Edna was a faithful follower of Jesus Christ and attended Horse Creek Baptist Church for most of her life. In later years she attended Bethel Freewill Baptist Church.
Edna was known as “Mom-Maw” to everyone. She was very loved and cherished. She will be deeply missed. She is now in her heavenly home.

The family would like to extend a special thank you to Dr. Thomas and to the staff on 4 South at Raleigh General Hospital who took such wonderful care of her during her final days and Elizabeth Ann Spangler who sat with and helped take care of her for many years.

Funeral services will be 1pm Thursday, August 3, 2017 at Calfee Funeral Home with Rev. Bill Calhoun officiating. Burial will follow in Blue Ridge Memorial Gardens. Friends may call on the family 1 hour before the service Thursday.
Grandsons will serve as pallbearers.