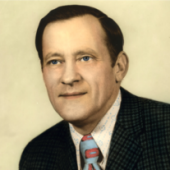 On July 12 at 10 AM, Eddie Eugene Sergent, 86, passed onto his heavenly home after a lengthy illness. Eddie had been a long-time resident of Beckley, WV, Nags Head, NC and finally Ripley, WV. He was born on July 8, 1932, the son of the late Lige Heyward and Sudie Pearl Sergent. He was preceded in death by brothers Lige Hayward Sergent, Jr and Billie Otha Sergent. Eddie is survived by his loving wife of 59 years, Wanda Mea Cantley Sergent, daughter, Melinda Marie Knotts (Steve) of Ripley, WV and son Charles Edward Sergent (Pamela) of Chesapeake, VA, grandchildren Chelsea and Bradley Knotts, Jordan and Taylor Sergent.
Eddie grew up in southern WV before serving proudly in the US Navy as a Sea Bee. After his service, he attended the Cincinnati College of Embalming, graduating on Sept 22, 1961. He then worked as a funeral director in various areas of WV before co-owning WV Casket Company in Beckley. He moved to Nags Head, NC in 1990 and returned to WV in 2004 to Ripley, where he resided until his death.
Eddie was a mentor to many youths in the Beckley areas the sponsor of the Straton Youth Conservation Club. He would always appear in the blue, casket van, taking youth to pick up trash or plant flowers. He eventually became a field director for the Youth Conservation Division of the WV Department of Natural Resources.
Eddie attended the Ripley Baptist Temple with Wanda regularly until health issues prevailed.
Services will be held at the Ripley Baptist Temple on Monday, July 16 at 1 PM. Visitation will be from 11:30 to 1:00. Services by Calfee Funeral Home. In lieu of flowers, donations can be made to Jim Franklin Ministries, “Songs In The Night”, PO Box 380355, Murdock, FL 33938.
To order memorial trees or send flowers to the family in memory of Eddie Eugene Sergent, please visit our flower store.