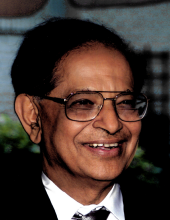 Dr. Syed Rasheed , loving husband, father, and grandfather died peacefully in his home surrounded by friends and family on Thursday, March 17, 2022 at 1:30 pm. His loving wife, Zarina was at his bedside.

He was buried according to Islamic funeral tradition. He died on an auspicious day in Islam called Shabe Berat and was laid to rest on Friday afternoon after the Juma Prayer at the Islamic Garden at Sunset Memorial Park in Beckley, WV.

Dr. Rasheed was born in Hyderabad, India, migrated to Karachi, Pakistan for medical school and then immigrated to the U.S. He settled in Beckley, WV in 1973. He was a kind and loving man who loved his family and especially his wife of almost 56 years. He was a pillar of the Beckley community having practiced medicine for over 40 years. He was devoted to his profession and the southern West Virginia community until he retired in 2014. He was an avid reader who must have read over 10,000 books in his lifetime. He loved history, poetry, religion, and fiction. He also loved football and was a serious WVU Mountaineers fan who stuck with his team through thick and thin. Satrudays in the fall were dedicated to watching Mountaineer football. In many ways, Dr. Rasheed was the unlikeliest Mountaineer immigrating from the far east to Appalachia. However, he proved that a home is what you make of it and the Appalachian community welcomed him with open arms.

He will be greatly missed by his wife, Zarina Rasheed (Anwar) and children and grandchildren and brother. They are Hassan Rasheed (son), Saba Ali (Rasheed) (daughter), Mushtaq Ali (son-in-law), Aasiya Ali (granddaughter), and Asif Ali (grandson) and Syed Mohiuddin (brother). In lieu of flowers, please make a donation to Hospice of Southern, WV at https://hospiceofsouthernwv.org/donate.

To order memorial trees or send flowers to the family in memory of Dr. Syed Rasheed, please visit our flower store.