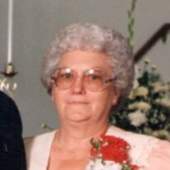 Dotsie Ellen Tennant Covey, 85, of Surveyor, WV passed away on Saturday January 30, 2016 at her home.

Born June 6, 1930 in Page, WV, she was the daughter of the late Eugene David and Elizabeth Cecilia Beasley Tennant.

Dotsie was a wife and homemaker. Her life was devoted to her home and family. She enjoyed listening to music and sitting outside in her swing watching her grandchildren play. Her grandchildren were the love of her life.

In addition to her parents, she was preceded in death by her brothers Lonnie, Bob, and Virgil Tennant and sisters Barbara and Francella Tennant and June Price.

Funeral services will be 1pm Tuesday, February 2, 2016 at Calfee Funeral Home in Beckley with Pastor Charles Gilbert officiating. Burial will follow at Blue Ridge Memorial Gardens. Friends may visit with the family from 12pm until the time of service.

Friends and family will serve as pallbearers .In lieu of flowers, the family asks that any memorial donations be made to the Sophia First Baptist Church
PO Box 1133 Sophia, WV 25921.