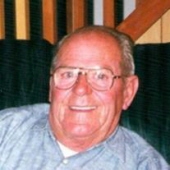 Donald L. Worley of Beckley, WV passed away peacefully Tuesday, November 25, 2014 at the Bowers Hospice House due to lung cancer.
Donald was born October 17, 1929 and raised in Glen White, WV to the parents of James W. and Mary Worley.
Donald joined the army in 1950 and was stationed at Ft. Belvoir, VA. After being honorably discharged from the army he moved to Eccles. He worked several jobs in construction and as an electrician on the Bluestone Dam and the WV Turnpike. He then became an electrician for Island Creek Coal at Lynco, WV, He moved to Kopperston and Oceana while working there. He built his dream home at Surveyor, WV and moved there in 1968. He later left working at Lynco and started working for Westmoreland Coal at Eccles, WV where he retired. He was a proud UMWA member during his entire career. He was a Christian.
He and his wife Shirley were married for 57 years. Together they had many happy years traveling cross-country and spending lots of time at their retirement home at Sunset Beach, NC. Donald loved time with his family at all family gatherings at Stephens Lake.
In addition to his parents, he was preceded in death by his wife, Shirley A. Worley; his brother, Carl Worley; his great grandson, Axel Lane Crouse; his sister-in-law, Rose Worley and his brother-in-law, PA Clyburn, Jr..
Those left to cherish his memory are daughters, Annette (Richard) Henderson of Eccles and Donna (Samuel) Browning of Tolleytown; grandchildren, Scott (Crissy) Henderson of Fairdale, Melissa (Derek) Weeks of Tolleytown, Shelly (Tommy) McClung of Eccles, Brandon (Angel) Browning of Soak Creek, Jeremy (Lindsy) Crouse of Tolleytown; 11 great grandchildren; Madison N. Crouse, Bryar L. Weeks, Laci A. Weeks, Austin L. Crouse, Coalman L. Crouse, Madison J. Stewart, Landon K. Browning, Brittini Orcutt, Sydney McClung, Tucker McClung, Blake Henderson; 2 great-great grandchildren; sister-in-law, Patsy Clyburn and many cousins, nieces and nephews.
Funeral services will be 7:30 p.m. Friday, November 28, 2014 in the Calfee Funeral Home Chapel with Pastor Dick Sellards officiating. Friends may visit with the family from 5:30 to 7:30 p.m. Friday. Entombment will be in Blue Ridge Memorial Gardens Mausoleum Chapel of Faith.11:30 a.m. Saturday .Grandsons will serve as pallbearers.
The family suggests memorial contributions be made to the Tollytown Cemetery at City National Bank.
On line condolences may be left at www.calfeefh.com.
Arrangements by Calfee Funeral Home, Beckley.
To order memorial trees or send flowers to the family in memory of Donald L. Worley, please visit our flower store.