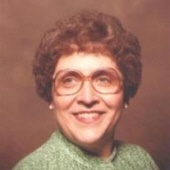 Dollie Louise Ellison Roach, 91, of Beckley passed away Monday, December 7, 2015 at Bowers Hospice House. Born January 7, 1924 in Beckley she was the daughter of the late Lacy Ernest and Margaret Laura Green Ellison. In addition to her parents she was preceded in death by her husband, Ronald Leland Roach and by her sister, Dr. Nellie Hope Ellison Dry and brother-in-law, Dr. Samuel Wilson Dry.

Dollie was a 1942 graduate of Woodrow Wilson High School. She attended Beckley College, Baylor University and the University of South Carolina. She was reported to be the first female bank teller in Beckley at the Bank of Raleigh. She was a former Assistant Vice President and cashier at First National Bank. Dollie also worked as a legal secretary for Ben Ashworth, as a clerk for Ashworth Firestone and as a bookkeeper for Snow Thornton Florist, A.A. Farmer and Mary Fink. She was a lifelong member of the First Baptist Church in Beckley and a former member of the Beckley Woman’s Club and the NABW. She fought for equal pay for women and was very dedicated to serving her community. She was a volunteer at the Beckley Veterans Area Medical Center for many years where she played the piano for chapel services.

Funeral services will be 12:00 p.m. Wednesday, December 9, 2015 in the Calfee Funeral Home Chapel with Rev. Doc Adkins officiating. Entombment will follow in Sunset Memorial Park. Friends may visit with the family one hour prior to service on Wednesday.