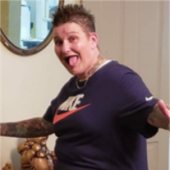 Deborah Lynn “Booie” Willard, 48 of Beckley, passed away Saturday, October 27, 2018.
Born September 30, 1970 in Winston-Salem, NC, she was the daughter of Mary Lou Weavil Locklear of Moorehead City, NC.
Booie loved everything and everybody, especially her dog Bootsie.
She was preceded in death by a sister, Wanda Kay Willard.
In addition to her mother she is survived by her wife and life partner, Michelle Willard; children, Justice, Justin and Dustin Willard of Winston-Salem; sisters, Louise Hagan and her children Tristan Mounce and Tonya Gillikin and Pamela Shouse and her children, Dwight Willard, Tabitha Willard and Bobby Shouse all of Moorehead City, NC; brothers, Jon Willard and his children, Lamonica, Zion and Chyna Willard and Will Willard of NC; step-sons, Jared Bieszczat and his girlfriend Dalton and Travis Grim and his girlfriend Chasity all of Beckley; grandchildren, Mia Grim and Jack Bieszczat.
There will be no service or visitation.
The family suggest in lieu of flowers donations be made to Calfee Funeral Home, 800 S. Oakwood Ave, Beckley, WV 25801 to assist with expenses.
Arrangements by Calfee Funeral Home, Beckley.
To order memorial trees or send flowers to the family in memory of Deborah Lynn Willard, please visit our flower store.