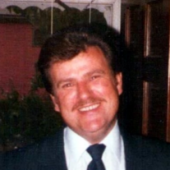 David Alan Conkle, 68, of Surveyor, WV, surrounded by his family, went home to receive his reward on February 17, 2016. He was born in Buchtel, August 30, 1947 to the late Gomer Harrison and Opal Ruby Estep Conkle. David was also preceded in death by his wife, Rose Marie Conkle, his sisters, Linda (Conkle) Jones, Janet Sauls and her husband L.D.; step-son, Bernie Honaker; grandchildren, Andrew William Conkle and Tesla Dawn Smith.
David was a proud Army veteran and a hardworking WV coal miner. He was a member of Grace Independent Baptist Church. He was a man with many talents, always loved working with his hands doing woodworking and taxidermy which led to many young boys getting their first squirrel mounted. But his smile, quick wit, and sense of humor will be missed the most.
Those left to cherish his memory are daughters Lahoma Smith and husband Michael, Tracy Massey and husband Cecil and Erica Williams and husband Scott; step- sons, Gary Honaker and his wife JoAnn and Danny Honaker and wife Liana; loving brother and friend, Bob Conkle and wife Faye; sister, Genieve Hagy; brother, Freddy Conkle and wife Patsy; 18 grandchildren; 3 great-grandchildren; many nieces and nephews and friends who will miss him deeply.
To honor his wishes we will celebrate his life on Saturday, February 27, 2016 at 4:00 p.m. at Grace Independent Baptist Chruch on Lower Sandlick Rd. with Pastor Benny Cozart officiating. Friends may visit with the family one hour prior to the service.