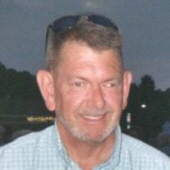 Dave Barton, age 65, of Beckley, lost a courageous battle on Sunday, October 11, at Raleigh General Hospital.
Born April 29, 1950 in Beckley, WV, he was the son of the late Fred Barton.
Dave was a 1968 graduate of Woodrow Wilson High School and attended Beckley College. Dave was truly a self- made man.
He started out working in the coal mines and then selling home improvements. He worked his way to the top in any job or profession and found himself in the first group of trained salesman hired by Derald Rollyson, and it was there he found is professional passion. He also found the love of his life in the title office and married Lisa roughly six weeks later. The couple beat the odds and raised two successful children together over their 36 years.
After excelling as a dominant salesperson, and later a successful manager and partner at various dealerships in the Beckley and Princeton area, he opened Barton Premium PreOwned Vehicles with his mini-me, his son, Chase. This was his crowning professional moment and he's never been more proud.
Dave enjoyed spending time with his family at any opportunity. He also enjoyed traveling to his second home in Surfside Beach with his wife and his fur babies, his schnauzers, Theo and Tucker.
Dave was preceded in death by his father, Fred, his Father-in-law, Clifford Sanger, and his original rescue fur baby, Chance.
Survivors left to cherish his memory include his muse and best friend, Lisa, his son and partner Chase Barton and wife Ashley, his daughter, Brianne Solomon and husband Ammed, his grandson, Cole Solomon, and his dogs, Theo and Tucker. He is also survived by his mother-in-law, Shirley Sanger and cousins Donna Miller and George Wilson. Last but not least to survive and cherish his memory are his work family and the many people who ended up saying he treated them just like a son.
Visitation will be at Calfee Funeral Home Tuesday, October 13th, from 6-8pm and again Wednesday, October 14th from 12pm - 1pm. Services will begin at 1pm and burial will follow at Blue Ridge Memorial Gardens. Officiating the service will be long time friend and mentor, Jerry Rose.
Pallbearers will be Ammed Solomon, Robbie Wilson, Bill Chapman, Dan Jarrett, Larry Coots, Jared Taylor and honorary Pallbearer will be Dave Harper.
In lieu of flowers, donations to the Women's Resource Center or Newspapers in Education are being requested as Dave loved his volunteer work with these foundations.
Online condolences may be left for the family at www.calfeefh.com.
Arrangements by Calfee Funeral Home, Beckley.
To order memorial trees or send flowers to the family in memory of Dave Barton, please visit our flower store.