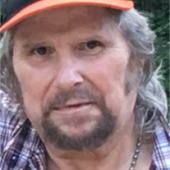 Danny Eugene Thompson, Sr., 62, of Clear Creek, went to be with the Lord Thursday, July 20, 2017 after a sudden illness that made him extremely sick and finally took him from us way too soon. He was a great man, father, grandfather, brother and son. He loved playing the guitar, had a passion for music and would listened to it every day but loved bluegrass above all other music.

Danny was preceded in death by his father, Benjamin Franklin Thompson and his beloved wife Deborah Lynn Thompson.

Funeral services will be Wednesday, July 26 at 11 a.m. at Sycamore Free Pentecostal Church of God. Friends may visit with the family on Wednesday, July 25 from 5-9 p.m. at the church. Danny will be laid to rest at Franklin Memorial Park in Virginia.