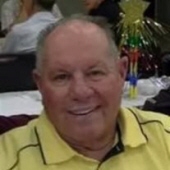 Dan was born May 12th, 1937 in Whitesville, WV where both his parents taught school at Clear Fork High School. He graduated from Woodrow Wilson High School where he ran track in 1955. He graduated from West Virginia University in 1960 where he studied mining engineering and graduated with a business degree. He was an active life-time member of Phi Kappa Psi Fraternity. Through school, Dan enjoyed waiting tables at the Kappa Kappa Gamma Sorority House.

Dan married Peggy Sizemore McClure in 1960. He started working for Northwestern Mutual Life Insurance while in school at WVU. He continued in the company until he retired as District Agent in 2002, continuing as an agent until his death.

From this union, Dan and Peggy had two children; Carolyn, married to Chuck; Paul and his girlfriend Anna. Chuck and Carolyn gave them their grandchildren whom they treasured; Chas and Brooke, as well as Brooke’s fiance Lanny Meadows.

Dan was preceded in death by his parents, Paul and Cary McClure.

Prior to his illness, Dan enjoyed a good game of tennis or golf. His most treasured moments were at his home on Flat Top Lake, where he spent time with his family and caring for his grand-dogs Ace and Rosco. He enjoyed vacationing with his wife and family at Hilton Head Island. In true Mountaineer fashion, Dan watched, listened, and supported his WVU Mountaineers in any sport they participated in. This included half-time phone call reports to his long-time friend, Don Miller. He enjoyed spending time with his cousins Wayne and Isabell as well as his uncle Sydney.

Dan’s heart and soul was dedicated to First Christian Church in Beckley where he enjoyed singing in the choir, serving as a deacon and trustee member. In lieu of flowers, Dan would like any contributions in his memory made to Frist Christian Church of Beckley, WV.

Services are scheduled for Wednesday, October 1st, 2014 with visitation beginning at 5:00 until 7:00 with services following immediately after. Services are provided by Calfee Funeral Home, Dan’s long-time friend and neighbor.
To order memorial trees or send flowers to the family in memory of Dan W. McClure, please visit our flower store.