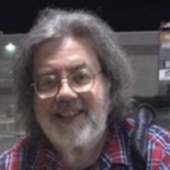 Dan Stillwell, 63, of Beckley passed away peacefully in his sleep Friday, September 14, 2018. Born July 3, 1955 in Mullens, WV he was the son of the late Edgar and Ora Barnett Stillwell. Besides his parents Dan was preceded in death by his sister, Judy Stillwell.

Dan was a sportswriter for the Register-Herald for many years. He was a member of the West Virginia Press Association and loved railroading, soccer, high school sports, political debates and music.

A visitation will be held on Monday, September 17, 2018 from 2-7 p.m. at Calfee Funeral Home. A private service will be held at a later date.

Memorial donations can be made in memory of Dan to the Raleigh County Humane Society or charity of your choice.

Arrangements by Calfee Funeral Home, Beckley.
To order memorial trees or send flowers to the family in memory of Dan Stillwell, please visit our flower store.