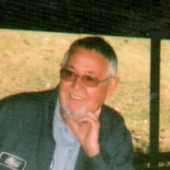 Clifton Parris Chandler, Sr., 75, of Crab Orchard passed away, Tuesday, January 8, 2019.
Bron July 4, 1943 in Man, WV, he was the son of the late Joe and Augusta Chandler.
Clifton was a coal miner having worked at varies area mines throughout his career retiring from Marfork Coal. He last worked as a tour guide at the Beckley Exhibition Coal Mine. He loved hunting and fishing and spending time with his family.
In addition to his parents he was preceded in death by his wife, Patricia.
Survivors include his daughter, Sherrie O’Neal of Beckley; sons, Bryan Leslie Chandler and wife Julie of Beckley, Clifton Chandler, Jr. and fianc Jeanetta Montgomery of MacArthur; grandchildren, Jennifer, Kristen, Justin, Melissa, Trevor; great-grandchildren, Peyton, Tristan, Jasper, Autumn, Gabriel, Kennedy, Clayton, Kyle and a brother, Clarence of OH.
Friends may visit with the family from 5-7 p.m. on Saturday, January 12, 2018 at Calfee Funeral Home.