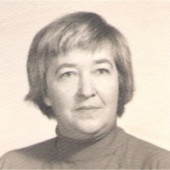 Clara was born June 25, 1928 in Beckley, WV and was the daughter of the late Lewis Richard Guilliams and Clara Belle Cole Guilliams. She was also preceded in death by her husband Billie M. Trump, her brothers, Lewis R. Guilliams and Robert A. Gulliams and her first grandson Eric James Trump.

She is survived by her sons Billie L. Trump and his wife Kathy, and Robert L. Trump all of Beckley and brother Jack Guilliams and wife Bertha of Farmington, NY, sister Martha Crowe of Stanaford, WV and a sister in law, Brooksy Guilliams of NY; grandchildren, Dr. Drew Trump and Tyler Trump of Beckley, Billy Trump of Sophia, WV and Tiffany Miller and husband Brian of Beckley; great grandchildren Makayla, Alexis and Malia Anderson and Chloe Miller all of Beckley, and many nieces and nephews.

Clara attended the Church of Christ in Piney View as her health permitted.

Clara was a strong, intelligent and determined woman. She grew up a child of the Depression and went on to marry and have two children. But she knew she had more to accomplish in life, so she went back to school. She became an LPN, then got her RN at WV Tech and finally her BS RN from WVU. She worked at local hospitals, did home health and finished her career at the VA Hospital in Beckley. Along the way she was a positive influence in many lives and helped many people. She was not without faults, but when viewed in light of her accomplishments, they didn't seem very significant. Over the last few years her sharp mind was diminished, until only traces of her sweet personality remained, and then it was gone. On June 9th her body followed as she stepped into eternity, but there is peace knowing that in the Lord's good time we will also follow and see her again on the other side.

Funeral services will be 11am Saturday, June 11, 2016 at the Calfee Funeral Home Chapel with Kenneth Thompson officiating. Burial will follow at Blue Ridge Memorial Gardens. Friends may visit with the family from 6 to 8pm on Friday, June 10, 2016 at the funeral home.