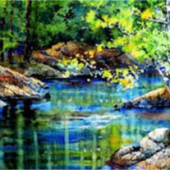 Christopher Selwyn Hale, 45, of Beckley passed away Saturday, June 25, 2017. He was born April 15, 1972 in Washington, D.C. to Bernard W. Hale and Joan Urband Hale and raised in Berea, Kentucky. He attended Brooks School in N. Andover, Massachusetts and graduated from Berea Community School and then attended Berea College. He was raised in the Catholic faith.
He is survived by his parents Bernard W. Hale, Beckley, WV; Joan Urband Hale of Louisville, Ky and brothers Matthew Hale (formerly of Beckley), and Augustine Hale, of Louisville, uncle Kevin B.Hale, Wood Dale, Il. and Kustan family in Florida.
He was recently employed by the Beckley Newspapers. He was the Founder and Chair of Friends of Water, current Chair of the Environmental Committee and Board Member, Executive Committee for The Sierra Club of West Virginia, worked with Citizens Climate Control and West Virginia Minerals Coalition and was a volunteer group leader for Citizens Climate Lobby for Southern West Virginia and has done work that has positively affected the lives of thousands through the social media-based group he founded which has encouraged citizen action in the area of public health. He was a talented musician and had performed in Kentucky, Nashville, Louisville, St. Augustine, Savannah, Atlanta and other cities. He had previously worked in the hotel management business, in coal mine security and white water rafting related business. The response of so many people to his family is a testament to the public advocacy work in which he was involved.
A Memorial Mass will be held 11:00 a.m. Saturday, July 1 at St. Francis de Sales Catholic Church with Very Rev. Paul Wharton, V.F. officiating. The family will see friends from 10:00 to 11:00 a.m.
In lieu of flowers memorial contributions can be sent to the Chris Hale Memorial Fund c/o Calfee Funeral Home, 800 S. Oakwood Ave., Beckley, WV 25801.
Arrangements by Calfee Funeral Home, Beckley.
To order memorial trees or send flowers to the family in memory of Christopher Selwyn Hale, please visit our flower store.