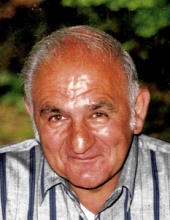 Charles N. “Nunz” Cernuto, 85, of Beckley passed away on February 4, 2022 surrounded by his adoring family.
Born November 23, 1936 in Stanaford, WV, he was the son of the late Charles “Charlie” and Louise Greco Cernuto.
Charles served honorably in the West Virginia National Guard. He was a master carpenter by trade, a farmer by choice and an amazing gardener, Charles took extreme pride in his farm and garden. He spent countless hours teaching his children and grandchildren how to work the land. He also took great pleasure in family hunting trips which always yielded a bounty of small game and provided a lifetime of great stories and precious memories.
In addition to his parents, Charles was preceded in death by the love of his life, his wife, Lula Mae Cernuto; a son Charles Ray Cernuto; brothers Robert “Bob” Cernuto and Carl “Mel” Cernuto as well as two sisters, Pauline Cernuto Bonham and Nellie Cernuto Hutchens.
Those left to cherish his memory are a son, David Cernuto (Kimberly); two daughters, Kathy Cernuto-Hall (Rick) and Donna Lambert (Tracey); grandchildren, Chad, Ricky, Austin, Rachelle, Brittany, Emily, Tre and Nicholas; seven great grandchildren and a very large network of family and friends.
Services will be held Thursday, February 10, 2022, at 12:00 p.m. in the Calfee Funeral Home Chapel with Chester Cochran, Pastor of Christian Chapel Baptist Church officiating. Burial will follow in the Cernuto Family Cemetery. Friends may visit with the family one hour prior to the service.

Arrangements by Calfee Funeral Home.
To order memorial trees or send flowers to the family in memory of Charles "Nunz" Cernuto, please visit our flower store.