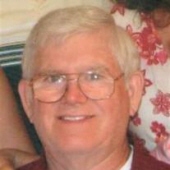 After nearly three years of battling Amyloidosis, various cancers, stroke, heart disease and other illnesses which severely diminished his physical abilities, Charles E. Ratliff has laid aside the debilitating body and has no doubt regained all again through death as he entered into the realm of eternal glory. Throughout his last years he remained steadfast in his faith to the end.

Charles grew up in Charleston, W.Va., and graduated from Dupont High School and attended West Virginia State. He moved to Bolt, W.Va. in 1976 and more recently to Beckley. He was a Veteran of the Korean conflict and served two years in the Army as well as 12 years in the Air National Guard and was later involved in the American Legion. While in Korea he was instrumental in helping to establish an Orphanage. He was a member of Calloway Heights Baptist Church and an active member of the Gideon’s. He was also a 32 Degree Mason and one of Santa’s life-long “helpers”. In his day to day life he was happiest when visiting and talking with others. In short, he had a positive impact on his community.

By far the thing on earth that he loved the most was his family. A devoted husband to the love of his life, Arrietta “Joan” Belcher Ratliff, with whom he shared 56 years. Together, they enjoyed traveling, reading and playing rummy. He has been loved and an inspiration to his three children and their spouses: Janice and her husband Bill Buch, Matthew and his wife Margaret Ratliff, Valeria and her husband Jeff Bolen. Additionally, seven wonderful grandchildren all of whom he was immensely proud; David and Sarah Buch; Jonathan and Katie Ratliff; Nicholas, Ben and Lucas Bolen. He enjoyed summer vacations with the whole extended family always making an effort to spend time with each of them whenever possible. He was always up for another special project if it involved getting to spend time with his family or do something for them. Charles was proceeded in death by his parents Arlond and Belva Ratliff, sister, Mildred Gill, brothers, Carlos, Bob and Elbert. He was survived by three brothers, James, Paul and Neil Ratliff.

He will be remembered not only by his family but by many others that knew or simply met him for the first time. He always had a piece of candy or special coin in his pocket for a child or adult alike and always had at least one two dollar bill for the hard working waitress or waiter as part of their tip or a child just needing a special boost. He loved giving away 2 dollar bills because it made the folks that received them feel special. That sums up his life, when you were around him you knew that you were important that that you mattered to him even if he just met you.

Services will be 12:30 p.m. Tuesday, November 3, 2015 in the Calfee Funeral Home Chapel, with Pastor Lee Swore, Pastor Bill Parker and Pastor Bill Horton officiating. Burial will follow in Blue Ridge Memorial Gardens. Friends may visit with the family Monday, November 2, 2015 from 6:30 to 8 p.m. and one hour prior to the service on Tuesday.

On line condolences may be left at www.calfeefh.com