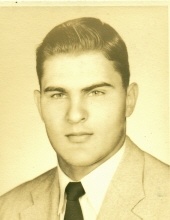 Bernard Joseph Menghetti, 85, passed on March 13, 2021. He was born February 26, 1936 in Rhodell, West Virginia to the late Joe and Julia (Garnett) and referred to himself as “Mr. Menghetti’s little boy, Bernie”.
He met many of his lifelong friends at Woodrow Wilson High School where he was a football three- year letterman. He was honored to be in their Hall of Fame and enjoyed several years as Hall President. While at Woodrow, he served in the West Virginia National Guard and after graduation attended Pennsylvania Military College.
He worked at Citco in the Chicago area then was drafted by the Army. He often commented how much he enjoyed his service in the First Cavalry, Korea, 140th Armored Division, especially as a cook. When he made spaghetti, officers would come to eat in his mess hall.
In 1971 he returned to Beckley as proprietor of Pinecrest Motel and Laundromat until his retirement in 2017.
Bernie was an unassuming, thoughtful gentleman preceded in death by his parents, wife Madelaine Francis “Pat” Ford, and sister, Rena “Antoinette” (John) Falsetti. Left to cherish his memory is sister Evelyn (Ruben) Gallegos and many nieces, nephews and cousins.
A funeral liturgy will be 11:00 a.m. Wednesday, March 17, 2021 at St. Francis de Sales Catholic Church with Very Rev. Paul Wharton, V.F. officiating. A Rite of Committal will follow at Blue Ridge Memorial Gardens.
Online condolences may be left at www.calfeefh.com.
Arrangements by Calfee Funeral Home.
To order memorial trees or send flowers to the family in memory of Bernard Joseph Menghetti, please visit our flower store.