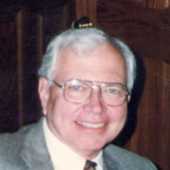 Born October 8, 1931 in Martins Ferry, Ohio, Barry was the son of the Late Jay Woods and Blanche Woods Ashworth of Beckley, West Virginia. He was a 1949 graduate of Woodrow Wilson High School in Beckley and attended the Kiski Preparatory School in Pennsylvania prior to attending college.

A 1959 graduate of the University of Virginia School of Engineering, he was a proud member of his alma mater's Rotunda Society and Thomas Jefferson Society of Alumni. He was an avid fan of all Cavalier sports and was a football season ticket holder for decades. Mr. Woods was commissioned as a First Lieutenant in the United States Army Signal Corps in 1956 and served for two years prior to graduating from UVA.

He worked as an electrical engineer for the General Electric Corporation in Salem, Virginia for seventeen years prior to moving to his hometown of Beckley to work as a mine lighting engineer. During his stint with General Electric, he was a design engineer tasked with building drive systems for nuclear submarines. Later in his career, he was the owner of State Adjustment Service in Beckley following in the footsteps of his mother Blanche, who founded the company in 1940.

A civic minded and involved member of his community, Mr. Woods served as Chairman of the Shady Spring District Library Building Committee, was a Board Member of the Beckley-Raleigh County Chamber of Commerce, and was a past President/Board of Director of the Flat Top Lake Association. Barry was a member of both Black Knight Country Club and Glade Spring Resort, where he often played his favorite sport of tennis. He attended the United Methodist Temple in Beckley.

He is survived by his wife and devoted partner of 56 years, Constance Duffy Woods; and beloved son, Hunter Woods (Tanja Daniels Woods) of Wytheville, Virginia.

Barry was a kind and gentle man, who had a profound and lasting influence on those who knew him. He will be greatly missed by his family and friends.

A service of remembrance will be held at The United Methodist Temple on Friday, January 4, 2019 at 12:00 pm with
Pastor Steve Hambrick officiating. The family will receive visitors from 11:00 am -12:00 pm.