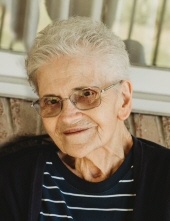 Barbara, “Bobbie” to many, and Mamaw to everyone else, Jean Kelley, passed away Saturday,
August 21, 2021 in her home in Coal City, peacefully after not feeling well for a very long time.
Barbara was born and raised in Coal City, West Virginia where she grew up helping her sisters,
Sue (Graham) and Betty (Kelley), run the small community store with her parents Ira and
Pauline Cole. She also had a younger brother, Johnnie Cole, who passed away as a young
boy, and she was looking forward to reuniting with him in Heaven.
All but Sue preceded her in death and the two of them were certainly best friends until the end,
shopping, eating together, and “carrying on” for the entertainment of all around them.
As a teenager she met John Glen Kelley, of Coal City, and they married (eloped actually) when
she was 19 years old. She and sister, Betty married twin brothers. Betty’s husband Joseph
(Ben) still resides in Dayton, OH. The four were quite close and yet nothing alike.
Barbara and Glen then traveled briefly during his time serving in the Air Force, and returned
with their only child Karen Sue Kelley (Lane). She then attended and graduated from Concord
College with an education degree, built a home on family land where they lived together until
Glen passed away in 2012. The two were married happily for 59 years. During that time, she
taught at Coal City Elementary for 29 years.
Barbara, the “manager” of the family, kept things going, with help of daughter Karen, at the
home until her passing. Not a holiday, birthday, or special occasion passed by without a meal
at “Mamaw’s” house. She liked everyone close by, all the time, and loved that Karen and son-in-
law Rick Lane were only a few houses down.
Karen and Rick had two children giving her the title “Mamaw” which she took very seriously.
Kelli (Carrico) and David Lane, were her two only grandchildren, which allowed her to spoil
them endlessly. She never missed a ballgame and seemed to adopt all the players from the
teams they played on. She also quickly and happily adopted the “extra” grandson, Kelli’s
husband, Timothy Carrico and loved him very much.
In 2002 her technical title was upgraded to great-grandmother. She had four greatgrandchildren,
Kaitlyn Edwards (18), Emma Carrico (12), Gracie Carrico (10), and Cole Carrico
(3). These four, we believe kept her going the last few years, and brought her so much joy. She
told a nurse recently, she just wanted to live for them.
Mamaw is certainly in a better place. Her mind never wavered, for which we are thankful. She
knew everyone and everything (you just had to ask her) until her last moments, even
FaceTiming Katie a few days before. She knew it was her time, telling daughter Karen, “Heaven
is the place to be” just before passing.
We are thankful for 87 years of her sarcastic quick wit, caring nature, snack plates, and
sleepovers. She taught many to read, write, and love over the years and will be deeply missed.
Special thanks to caregivers, Regina and Glen Sheets, Sherry Matherly, and Tia Wilson.
A private service will be held Saturday at Calfee Funeral Home for the family followed by a
short grave side service at Sunset Memorial Park.
Flowers may be sent to:
Calfee Funeral Home 800 S Oakwood Ave. Beckley, WV 25801
To order memorial trees or send flowers to the family in memory of Barbara Jean Kelley, please visit our flower store.