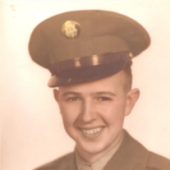 SSgt. Audrey Neale Painter, 86, of Daniels, passed away Wednesday, January 31, 2018. Born July 1, 1931 at Maynor, WV, he was the son of the late Luther Martin and Vada May Worrell Painter.
Audrey was a retired factory worker in the mobile home construction industry. He was a U.S. Army veteran serving two tours in Korea. He was declared an “Ambassador for Peace” by the Korean Veterans Association and presented with a highly esteemed “turtle ship” and a medal struck by the South Korean government honoring American servicemen who fought alongside soldiers of the Republic of Korea during the Korean War.
In addition to his parents he was preceded in death by his wife, Betty Snyder Painter.
Audrey is survived by brothers, Alfred Darrel (Patricia) of Beckley, Ralph (Brenda) of FL, John (Estrella) of Corpus Christi, TX, Dr. Conley (Carolyn) of Pearisburg, VA, Luther Ray (Ramona) of Salem, VA; sisters, Gail Facello of Prosperity, WV, Geraldine (Hobart) Butler of Covington, VA, Louise (George) Yopp of Salem, VA, Diane (Barry) Booth and Jo Ann (Raymond) Booth of Peterstown, WV; sister-in-law, Carol Roshong (Loman) of Leesville, LA.
There will be no services or visitation. Audrey will be interred in a VA cemetery in Leesville, LA.