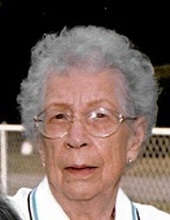 Anna Marie Clemens Huddleston, 105 years of age, of Maxwell Hill, Beckley, WV, passed away peacefully on Saturday, August 14, 2021, at the Raleigh Center Nursing Home.
She was one of those who lived through the great Depression and WW II, a member of the greatest generation. She was born at Bolt, WV on March 14, 1916, the daughter of Hank and Dora Shumate Clemens. She was the last remaining member of her immediate family. In addition to her parents, she was preceded in death by two sisters, Leeta Clemens and Ennis Clemens Bowen and four brothers, all Clemens: Beecher, Virgil, Hubert, and Charles.
Marie, as she preferred to be called, spent her early years at Bolt and completed her schooling at Trap Hill High School. As a young woman she moved to Beckley with her family and began working as a telephone operator for the C&P Telephone Company. She had fond memories of that time, in the late 1930s and early 1940s, when she said life was simpler. She remembered when she would leave work at midnight in mid-December, the stores had just been decorated. Christmas lights had been strung across the streets, a light snow was falling, and she would walk home without any fear. Even though times were hard, she said, they were all “in the same boat” and were willing to help each other.
She married Alfred Frank Huddleston in 1941 and worked through the WW II years as he served in the Army. When he returned after the war they moved to Boomer, near Montgomery, WV. For many years they lived happily there and had one son, Michael Wayne Huddleston. She dearly loved her family and was a full-time homemaker with high standards. When Michael was older, she took employment with Ruckman’s Jewelry store in Montgomery. She enjoyed the work there and she was able to and enjoyed collecting WV glassware such as Blenco, Fostoria, and Fenton.
Her husband passed away in 1976 and then in 1985 Marie moved back to Beckley to be near her family. During all this time in Montgomery and Beckley, Marie was an active member of the Methodist Church. She last attended St. Mary’s United Methodist Church in Beckley until failing health prevented her attendance.
The tragedy of her life occurred in 1995 when her beloved son, Michael, was killed in an industrial accident. But happily, Michael’s family has been devoted to her and she to them which brought her great joy.
Marie was preceded in death by her parents and siblings, her son and husband as listed above. In the extended family, she was preceded in death by one niece, Nancy Clemens Belcher.
Those who survive to cherish her memory are her daughter-in-law, Leisa Huddleston of Greensboro, NC and her three grandsons: Grey Huddleston and his wife, Leigh Ann and their son, Evan of Mooresville, NC; Daron Huddleston and his wife, Ashley and their sons, Brooks and Cooper of Murfreesboro, TN and Travis Huddleston and his wife, Christina of Greensboro, NC.
Marie is also survived by two nephews, Virgil Lee Clemens, Jr. and Marian Robert Clemens who live in Ohio and five nieces, Ella Mae Pennington (husband Jimmie), Patty Paretti (husband, Anthony, deceased), Judy Hatfield (husband Jimmy), Thelma Anderson (husband Ernie), and Mary Norman (husband Bob). All the nieces have Clemens as maiden name and reside locally.
Marie was able to remain in her home until she was admitted to Raleigh Center Nursing Home the last few months of her life. The family extends gratitude to the nursing home for care given, especially during the pandemic. We’re also grateful to a very special caregiver, Sharon Stover, who was with Marie in Marie’s home for eight years and was devoted to her. Marie’s much- loved dog, Molly, also received Sharon’s care and devotion. Ella Mae, Marie’s niece, was also an integral part of Marie’s care.
Marie was an amazing and blessed woman who remained alert and active to the end of her long life, even maintaining a fragrant rose garden until her 103rd year. She also enjoyed watching sports, especially WVU football. She will be greatly missed by family and friends.
Services will be at Calfee Funeral Home, South Oakwood Ave in Beckley, WV on Saturday, August 21, 2021, at 2 pm with Rev. Betsy M. Evans officiating. Visitation will be 1 hour before the service. Interment will be in the Mt. Tabor Cemetery. Pallbearers will be grandsons, Grey, Daron, and Travis Huddleston, and friend Clifford Calloway.
Donations of sympathy may be made to a charity of choice. One suggestion is the Raleigh County Humane Society.
To order memorial trees or send flowers to the family in memory of Anna Marie Huddleston, please visit our flower store.