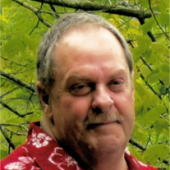 The world is a sadder place with the passing of Allen Wayne Moore of Crab Orchard, on March 31, 2019 at Bowers Hospice House after a battle with lung cancer. “Wayne” to his friends and family, was a generous soul and a friend to all he met. A true mountaineer at heart, he refused to leave the home he loved.
He was born October 19, 1948, in Eccles, WV. The sixth child and youngest son of a coal mining family from Tennessee. Homer Moore, his father passed when Wayne was just six years old, after a fatal strike by a coal train. His mother, Dora Moore was a force to be reckoned with and ensured that he had a proper upbringing, after the passing of her husband. Wayne was the last member of his immediate family.
Upon receiving his first paycheck, Wayne went out and purchased a new living room suit for his mother. With his second paycheck, he bought a car for $50, with the assistance of his brother, Les. It was a fastback Mustang GT that had starter issues. Consequently, this car lead to Wayne asking a pretty girl to “pop the clutch” for him while he pushed to get the car started. After the car was running again, he asked that girl on a date. A number of years later, that pretty girl, Peggy McGown, became his wife. They had three children together, a still born son, a daughter Katie Jo whom passed from leukemia at a young age, and Michelle (Moore) Lilly. Michelle gave him three grandchildren: Jacob Combs, Steven Lilly Jr., and Cora Lilly. He was so proud of all three of his grandchildren. He had several loving nieces and nephews.
During the years that his daughter played softball, Wayne coached many softball teams. He had a big impact on the lives of the girls that played softball with Michelle. They called him “Big Daddy Wayne” on the softball field. He was a fair coach and loved the game, as much as he loved the girls he coached. He has been known to say that those were some of the best times of his life.
Wayne was a graduate of Woodrow Wilson High School and Concord College. He worked in several professions throughout his life but, he was best when he was traveling around visiting and making new friends. He began working at the Register Herald in the 70s and eventually rose to the assistant editor position. During the 80s, he worked at WOAY TV 4 in the advertising department. In the early 90s, he was an advertising executive for the Rural Health Clinic in Beckley. He even served a stint as the Regional Manager for Jim Walter Homes before once again, returning to the advertising world at then, Charter Communications. Upon retiring from Charter, now Suddenlink, he worked part time delivering auto parts. Throughout his travels selling, advertising, and delivering auto parts he made a world of friends around the Southern West Virginia area, whom will miss him greatly.
A few years after the sudden passing of his first wife, Wayne married Ms. Celia Farris. Celia’s daughter, Catherine (Sexton) Newberg and husband, Jeffrey became part of Wayne’s family. Celia and Wayne lived happily with one another for the past nine years. They enjoyed spending their time with each other. During their marriage, they enjoyed traveling to TN, exploring the local attractions and history of the state.

Memorial contributions may be made to Bowers Hospice House, 454 Cranberry Dr, Beckley, WV 25801

Arrangements by Calfee Funeral Home.
To order memorial trees or send flowers to the family in memory of Allen Wayne Moore, please visit our flower store.