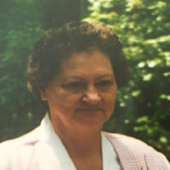 Ada Lambert Daniels, 85 of Daniels, died Thursday, January 25, 2018. Born December 31, 1932 in Pemberton she was the daughter of the late Richard and Dixie Wiles Lambert.

Ada was of Baptist faith and a retired nurse.

A graveside service will be 1pm Saturday, January 27, 2018 at Lester Cemetery with Rev. James Ford officiating. She will be laid to rest beside her husband and children.