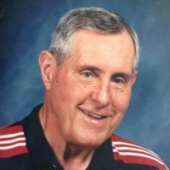 Tim Thompson, 86, went to be with the Lord after passing away peacefully on September 20, 2013, with his son, Ed, by his side. He had a long life full of family, friends, and great memories in his beloved town of Beckley, WV.
He is survived by two daughters, Stephanie Cooksey and her husband, John, of Spring, TX, and Catharine 'Kitzy' Cotogno and her husband, Ken, of Flemington, NJ; two sons, Ed Thompson and his wife, Cindy, of Jamestown, NC, and Tim 'Ox' Thompson and his wife, Robin, of Klamath Falls, OR; his two grandchildren, Cassandra and John Nicholas Cooksey; and many loving nephews, nieces, and their families.
Born May 8, 1927, in Ravenswood, WV, Mr. Thompson was the youngest son of the late Ronald E. and Ivy Mabel Sinnett Thompson Sr. He is also preceded in death by his brothers Ronald E. “Tom” Thompson, and Stephen B. “Steve” Thompson, and his former wife, Catherine “Kay” Allen Thompson.
Mr. Thompson grew up in Parkersburg, proudly attended West Virginia University, was a member of Beta Theta Phi, and settled in Beckley after college. He graduated from the University of Cincinnati, College of Pharmacy in 1957 and moved back to Beckley to continue his career and raise his family. He was a veteran having served in the US Navy during WWII and later serving in the WV National Guard during the Korean War. He attended advanced officer training school at Ft. Benning, GA.
During his dedicated career of over 50 years as a registered pharmacist, Mr. Thompson served the community through his work at Thompson Drug in Beckley and Crab Orchard, and later at Professional Pharmacy. He became a licensed nursing home administrator and provided leadership at Pine Lodge Nursing Home in Beckley, introducing the first nursing home in West Virginia to have an in-house pharmacy. He continued working as a nursing home consultant and administrator in Bluefield until 2003 when he retired.
Mr. Thompson was an active member of the community in many different fraternal orders and social clubs including Rotary Club, Elks Club, Moose Club, Glade Springs and Black Knight Country Club. He also served as the Beckley Police Commissioner. He enjoyed golf, beating his friends at cards, and watching football, particularly the WVU Mountaineers and the Washington Redskins. Most of all, he will be remembered as a loving and generous father.
In 2011, he moved to Flemington, NJ to live with his daughter Catharine and her husband Ken. After a couple of years he realized how much he missed those 'country roads' and returned to Beckley where he always felt most at home, surrounded by so many familiar and dear faces.
A celebration of his life will be held at Calfee Funeral Home at 800 S. Oakwood Avenue in Beckley on Wednesday, September 25 at 11:00 a.m. Friends may visit with the family one hour prior to the service on Wednesday. In lieu of flowers, donations to the Salvation Army of Beckley at 312 S. Fayette St., PO Box 1573, Beckley, WV, 25802, would be welcomed.

Condolences to the family may be e-mailed on the website www.calfeefh.com. The family extends special thanks to Manny “Mankind” Arellano who provided extraordinary care over the last 4 months, and to Mr. Thompson’s dear friends Doug Jarrell and Connie Green, and to Gary Poling, MD for their incredible support and care. Many heartfelt thanks to the staff and residents at Greystone and the staff at Raleigh General Hospital for their compassionate care.
To order memorial trees or send flowers to the family in memory of Tim Thompson, please visit our flower store.