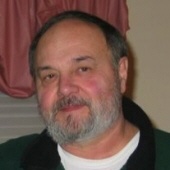 Robert “Bob” Joseph Andrighetti, 66, of Beckley died May 29, 2014 at the Bowers Hospice House from a brain tumor with his family at his bedside.
Born September 15, 1947 in Beckley, WV, he was the son of the late Merle and Irene Andrighetti. Bob was a graduate of Wodrow Wilson High School and heavy duty construction school. He worked for Oscar Vecellio Inc., Jessup’s Sporting Goods, National, DPS, and RPI security firms and Brake Supply Co. He also performed detective work. He worked closely with many sheriff and police departments of southern WV.
Bob was a member of St. Francis DeSales Catholic Church. He enjoyed hunting and fishing and had many strong friends that shared his hobbies.
In addition to his parents he was preceded in death by brothers-in-law, Larry Bays and Scott Simkins.
Bob is survived by a brother, John Andrighetti of Beckley; sisters, Mary Theresa Bays of Beckley and Martha Simkins of Fountain Hills, AZ; nieces and nephews, Max Bays of Odenton, MD, Julie Bays of Beckley, Austin Reinshuttle (Michelle) of Alexandria, VA, Scott Andrighetti of Beckley, Amy Andrighetti of Beckley, Andrew Simkins of Nashville, TN and Elizabeth Simkins of Flagstaff, AZ.
There will be no services per his request. His body will be cremated. A celebration of life will be held at a later date.
The family would like to thank the staff of Bowers Hospice House of Beckley, Cabell Huntington Hospital, ER at BARH, and family and friends who offered support and prayers during this difficult time.
Donations of sympathy may be sent to Bowers Hospice House, 454 Cranberry Dr., Beckley, WV 25801.