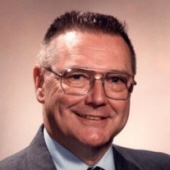 Dr. Paul Reiter, after a long illness, went to be with the Lord June 27, 2013. This is by God’s grace according to Scripture, For by grace are you saved by faith, and that not of yourselves, it is the gift of God, not of works, lest any man should boast. Ephesians 2:8-9.
Paul was born November 2, 1929 in Haiti, son of Charles and Helen Reiter. He grew up in Dallas, Oregon. Paul graduated from Tarkio College and Dallas Theological Seminary, where he earned a Th M degree. Later he earned his PhD, magna cum laude, from the California Graduate School of Theology.
In 1951 he married Lou Krichbaum. Paul is survived by his beloved wife Lou, daughters Kathy of Pennsylvania, Laura and her husband John of New Zealand, and grandchildren; Chris and Sarah, Deanna and Mike, Julianna, Kim and David.
Paul received Christ as his Savior in February, 1949, and was ordained to the ministry in 1956. He served five churches as pastor, and many churches as interim pastor. He was privileged to be on the faculty of Appalachian Bible College for 35 years. He was especially known for teaching the Pauline Epistles and he loved having a part in training men to be pastors. He had great affection for the people of Hilltop Baptist Church and his colleagues and friends at A.B.C.
Burial services will be held privately. A memorial service will be held at 1:00 p.m. Saturday, July 6, 2013 at Anderson Chapel at Appalachian Bible College with Pastor Pat Haynes and Dr. Daniel Anderson officiating. In lieu of flowers, please consider Appalachian Bible College or Bowers Hospice House.
On line condolences may be left at www.calfeefh.com.
Arrangements by Calfee Funeral Home, Beckley.
To order memorial trees or send flowers to the family in memory of Paul Dr. Reiter, please visit our flower store.