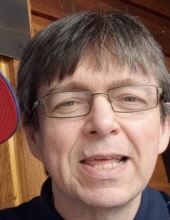 Michael "Mike” Bryan Lockhart formerly of Gassaway WV, died peacefully at his home in Beckley WV on March 23, 2021.
Mike is survived by his loving mother, Nellie King Lockhart and stepmother Wilma Fox Lockhart, both of Gassaway; his son Michael Bryan Lockhart, Jr. and wife Danielle of Summersville, WV; sister, Pamela Lockhart Shrader and husband Rev. Mark Shrader of Beckley; aunts and uncles: Linda King and Phyllis Jones of Gassaway, David and Janet King of Birch River, Jim and Loretta King of North Ridgeville, OH, and Judy and Jim Curtis of Junior, WV. He was preceded in death by his father Jennings Bryan Lockhart.
Mike was a dedicated father to his son Michael and centered his entire adult life around making him happy and successful; he was so proud of the man he had become. One of Mike’s greatest joys was looking forward to being a Papaw in September to Michael and Danielle’s precious little daughter Elaina. He was beloved “Uncle Mike” to his special niece and nephews, Amelia, Benjamin, and Cohen Shrader.
He was born on May 17, 1961 in Gassaway. He graduated from Braxton County High School in 1979 and continued his education by receiving a B.S. in Business Administration and Banking from Fairmont State College in 1983. During his banking career he worked as Vice President at Summersville Bank One, Bank of Gassaway, and Premier Bank in Gassaway.
Mike loved to travel and spend time at the beach. He was a very avid sports fan with a passion for the WV Mountaineers and Green Bay Packers. He coached little league baseball and soccer. In his younger years he was an eager golfer. Drawing from his minor in history, he loved researching and discovering unique facts and events about American history and politics, especially the United States Presidents. Mike was always the dedicated family man who always put family’s needs before his own. He was a devout Christian and was an active and dedicated member of the Engle Chapel Community Church in Gassaway where he volunteered and sometimes lead worship. He also attended Beckley Community United Methodist Church.
A celebration of life is scheduled for 2:00 P.M. on Saturday, March 27 at Engle Chapel Community Church in Gassaway with Pastor Tom Harper officiating. Friends and family may call from 12:00 – 2:00 P.M. prior to the service. A private committal will be conducted following services at Sugar Creek Cemetery with Rev. Mark Shrader.
Arrangements by Calfee Funeral Home in Beckley WV.
To order memorial trees or send flowers to the family in memory of Michael Bryan Lockhart, please visit our flower store.