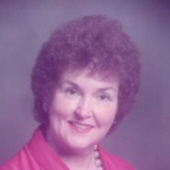 Mary Ruth Fleming Holdren died March 13, 2014 at Hospice of West Alabama in Tuscaloosa, AL.
She was a native of West Virginia, born at Eccles on July 3, 1931, the sixth daughter of Philip Grant and Gertrude Falin Fleming, both deceased. She was a 1948 graduate of Trap Hill High School, Surveyor. She worked from September 1948 to May 1951 at the Chesapeake & Patomac Telephone Company in Beckley. She began her career with the Veterans Administration Medical Center in Beckley two months after its opening in 1951. There she met Arnold C. Holdren, and they married in May 1956. She was employed for 23 years at the Beckley VA Medical Center in various positions until transferring to the VA Regional Office in St. Petersburg, FL, in 1974. She later transferred to the VA Medical Center in Asheville, NC, where she retired. She moved with her husband to Manchester, New Hampshire, and later to Tuscaloosa, AL, where Arnold retired from the VA in 1985 following 34 years of service.
In addition to her parents she was preceded in death by sisters Mildred Garrett Grimmett, Beatrice Morris Hallman, Vivian Pachuta Brown and Anna Lee Hargett.
She is survived by her husband, Arnold Holdren of Tuscaloosa, AL; two sisters Myrtle F. Dalton, Beckley, WV and Barbara F. Holden, Tarboro, NC, a niece and two nephews.
Mary faithfully attended the First Church of God, Robert C. Byrd Dr. (Now Cross Point Church of God, Crescent Rd.) Beckley for 25 years; then First Church of God, St. Petersburg, FL; Asheville, NC and Tuscaloosa, AL. She also attended First Wesleyan Church of Tuscaloosa.
Private funeral services will be 10:30 a.m. Wednesday, March 19, 2014 in the Calfee Funeral Home Chapel with Pastor Vondie L. Cook, II officiating. Burial will follow in Calfee Cemetery, Mt. Tabor. There will be no visitation.
On line condolences may be left at www.calfeefh.com
To order memorial trees or send flowers to the family in memory of Mary Ruth Holdren, please visit our flower store.