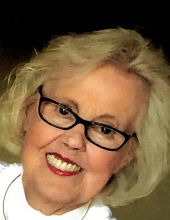 Mary Jane was born on November 13, 1929 to Paul Alexander Brown and Mary Lou Fox Brown in Oak Hill, West Virginia. Mary Jane, the youngest of the three Brown children, had two siblings, Paul Jerry Brown (who passed in February 2005) and Joseph Milroy Brown. She attended Marshall University and was a schoolteacher in Oak Hill, West Virginia.
Mary Jane was a loving mother and faithful wife whose life mission was centered on the happiness of others. She was kind and humble with a contagious smile. Mary Jane never met a stranger and always said sweet words to others. She served as a member to the Beckley Women’s Club and Briarcliff Garden Club and was a founding member of The Kravis Center for the Performing Arts in West Palm Beach, Florida. Mary Jane was also a member of the Beckley Presbyterian Church for over 50 years.
Mary Jane enjoyed playing bridge with her friends and was an avid golfer and tennis player. She belonged to the Greenbrier Sporting Club in White Sulphur Springs, West Virginia, and a former member of Jupiter Hills Country Club in Tequesta, Florida and Lost Tree Club in North Palm Beach, Florida.
Mary Jane is survived by her loving family. Her beloved husband of 66 years, James Edward Songer. Her daughter, Deborah Songer Gray and husband Rick of Beckley. Her son, James Edward Songer II, of Beckley. Her daughter, Suzanne Poteet and husband Chuck, of Houston, Texas. Her brother, Joseph Brown and wife Jimmie of Starkville, Mississippi. Her grandsons, Ryan Gray and wife Jennifer, of Kansas City, Missouri (and their children Carter, Cruz, Cameron and Gracie), Richard Gray and wife Kara of Scott Depot, West Virginia (and their children Mason, Meadow and Malea), Trey Poteet and wife Andrea of Houston, Texas (and their children Cade and Cody), James E. Songer III of Beckley and Steven Songer of Beckley. Her granddaughter, Christie Lilly and husband Mike of Beckley (and their children Trace and Savannah).
She was preceded in death by her loving son John William Songer and daughter-in-law Lisa Christie Songer.
A private memorial service to honor her life will take place at the United Methodist Temple in Beckley and internment will follow in the Songer Section of Sunset Mausoleum at Sunset Memorial Park. The service will be officiated by Rev. Chuck Pullins. In lieu of flowers, the family asks for donations in memory of Mary Jane Songer to the UVA Cancer Center.
Online condolences may be left at www.calfeefh.com.
Arrangements by Calfee Funeral Home.
To order memorial trees or send flowers to the family in memory of Mary Jane Songer, please visit our flower store.