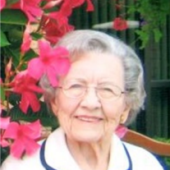 Mary Elizabeth Avis, formerly of Beckley, died on Thursday, September 8, 2016 at Delmar Garden’s Nursing Home in St. Louis, MO.
Born in Mann, WV on April 10, 1913, she was the daughter of Cecil H. Perry and Nancy Wooten Perry. She graduated from Mann High School and received a Bachelor of Arts from Marshall University.
Mary Elizabeth taught math at Logan High School before moving to Beckley in the early 1940’s. She returned to teaching in 1962 when she taught math and science at Woodrow Wilson High School until she retired in 1975.
In addition to education, Mary Elizabeth was very involved with church and culture. She was a member of the Beckley Presbyterian Church where she served as Deacon and Elder. She was also a member of the Azalea Garden Club, Beckley Women’s Club, Black Knight Country Club and Flat Top Lake Association. Being an avid bridge player, she especially cherished her bridge and birthday group which consisted of some of her very dear friends.
Mary Elizabeth was preceded in death by her parents, Cecil H. Perry and Nancy Wooten Perry, her husband, Hugh Clyde Avis, and her brother, Paul H. Perry.
She is survived by her son, Hugh C. Avis; her daughter, Betty Lee Hale and her husband, Robert E. Hale; two grandchildren, Lee Evans Hale, and Katherine Elizabeth Leary and her husband, John Leary; and four great-grandchildren, Joshua Leary, Allison Leary, Shea Hale, and Logan Hale.
Visitation will be at Calfee Funeral home on Tuesday September 13, 2016 from 10:00 to 11:00 followed by the funeral at 11:00 with burial at Sunset Memorial Park after the service.
The family requests that in lieu of flowers, donations be made in Mary Elizabeth’s honor to Pathways Hospice & Palliative Care, 14805 N. Outer Road, Suite 160, Chesterfield, MO 63017or to CURED (campaign urging research for eosinophilic disease) at CURED, P .O. Box 32, Lincolnshire, IL 60069.
Online condolences may be sent to www.calfeefh.com
To order memorial trees or send flowers to the family in memory of Mary Elizabeth Avis, please visit our flower store.