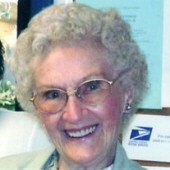 She was born January 4, 1917, at Sun, West Virginia, to the late parents of Roy Lee Sweeney and Mary Ballard Sweeney. She was previously from Skelton before moving to Beckley in 1968.

She is survived by her children: Patrick and Janet Williams of Springfield, Ohio; Nancy and Pat Coutcher of Wagram, North Carolina; Roy and Myrt Hutchinson of Arcanum, Ohio; Earl Wayne and Patricia Hutchinson of Marion, North Carolina; and Dwight of Beckley. She is also survived by a special and blessed friend, Ann Miles of Beaver, Molly, her feline companion, and LuLu, her canine friend.

Because of her love of animals, memorial contributions may be made to the Humane Society of Raleigh County, 325 Grey Flats Road, Beckley, WV.