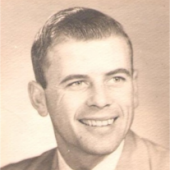 Lucian Moody Waddell, 86 of Beckley, passed away Tuesday, March 28, 2017 at Cabell-Hunting Hospital. Born December 13, 1930 in Coal City, WV, he was the son of the late Dewey George and Hallie Cooper Waddell.

Moody graduated from Stoco High School in 1949. He attended Glenville State College for one year before serving two years in the Army during the Korean Conflict. He obtained his B.S. degree in Education from Morris Harvey College and then continued on for a Masters degree in Education from Marshall University. In 1957 Lucian Moody married Patricia Ann Fink of Crab Orchard, WV. They would have been married for sixty years this coming June 28, 2017. They have two children, Michael Lucian Waddell of Bradley, WV and Kimberly Ann Baglin (Chad) of Shady Spring, WV. They are the proud grandparents of four grandchildren, Zachary Michael Waddell of Ghent, WV, Jaidyn Makenna Waddell of Beckley, WV, Brieanna Alexis Baglin and Isabella Grace Baglin of Shady Spring, WV; he is also survived by sisters, Eunice Pearl Waddell of Beckley and Mary (Ernest) Harvey of Coal City and the Raleigh Center.

Moody enjoyed the love of sports throughout his life, especially baseball. He will be remembered as a loving and devoted father, who coached both of his children’s baseball/softball teams. He was a man of his word, honest and hard working, who loved to laugh, and will be remembered for his smile.

He was a man of many ambitions and devout public service. He worked in the coal mines while obtaining his college education. He taught English and Social Studies at Woodrow Wilson High School. He later became a Vocational Rehabilitation Counselor, providing those with disabilities a vocation. He was also a small business owner of Park Heights Service Center of Beckley, WV for several years.

Lucian Moody was from a family of twelve, six sisters and six brothers. In addition to his parents he was preceded in death by brothers, Dewey, Charles, Lewis, Clyde and Quincy; sisters, Gertrude, Geals, Delila and Athlene and foster brother, James (Jay) Bowling and foster sister, Faye Craighead.

Funeral service will be 2:00 p.m. Sunday, April 2, 2017 in the Calfee Funeral Home Chapel with Pastor Melvin Jamison officiating. Burial will follow in Sunset Memorial Park. Friends may visit with the family from 12:00 p.m. until service time on Sunday.

Family and friends will serve as pallbearers. Donations in memory of Lucian Moody may be made to the charity of your choice.