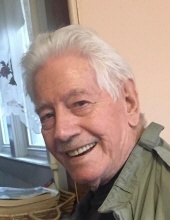 In addition to his parents, he was preceded in death by siblings Clarence Humphrey, Michael William Humphrey, Bruce Humphrey, Wanda Humphrey Stover, Jeanie Hurt Hamilton; and his beloved dog “Red.”

At the age of 16, he enlisted in the Navy, serving as a sniper in the Pacific during World War II. He spent 35 years working at the VA Hospital as a boiler plant operator in Beckley, and owned Hurt’s Used Car Lot in Bradley. In retirement, he worked as a security guard at an auto auction in Orlando, FL.

Lacy was a man of many talents. He created beautiful tile work, raised gorgeous gardens, and made the best cornbread. He was a car aficionado. An animal lover, he was universally loved by dogs. He attended Packs Branch Baptist Church.

Throughout his life, the VA remained his second home. The family would like to thank the staff and providers there for decades of loving care. Likewise, we are thankful for the compassionate end of life care he received at Pine Lodge and Bowers Hospice House.

A graveside service will be held Monday, July 13th at 1 pm in mausoleum number 3 at Blue Ridge Memorial Gardens, with Rev. Sam Vance officiating. A celebration of life will be scheduled at a later date.

Arrangements by Calfee Funeral Home.
To order memorial trees or send flowers to the family in memory of Lacy Edwin Hurt, please visit our flower store.