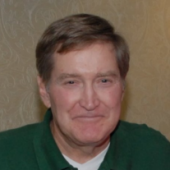 Joe Yingst, Sr., 69 of Cross Lanes passed away Wednesday July 5, 2017 after a long Illness. He was born October 16, 1947 in Philadelphia, Pennsylvania and adopted as an infant by the late John William Yingst and Sara Margaret Yingst ne Kofroth spending most of his childhood in Pittsburgh, Pennsylvania.

When he was a senior in High School, his family moved to Huntington, WV. Joe went on to Graduate from Marshall University in 1969 where he was an active member of Pi Kappa Alpha. He spent nearly all of his professional career in the Food Service Industry spending 27 years at Standard Food Service, later retiring from Corey Brother’s in 2003. Joe was a member of The Lake Chaweva Club for 45 years and was active in community service for the Lake during that time.

A celebration of Joe’s Life will be from 1:00pm – 3:00pm, Saturday, July 8 at Calfee Funeral Home, 800 S. Oakwood Ave Beckley, WV. In lieu of flowers the family asks for consideration of donations in Joe’s name to The Asthma and Allergy Foundation of America or a charity of your choice.