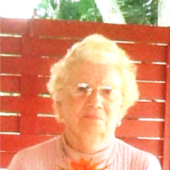 Joann was a former sales clerk for Imperial Smokeless Coal company store, and also worked at the Plaid Stamp store and Betty’s Ceramics. She was a member of Mt. Tabor Baptist Church where she was involved in many church functions.

In addition to her parents she was preceded in death by her husband, Herbert; brothers, Ronald, Gene, Floyd and Benjamin O’Dell and a sister, Wilma Phipps.

Services will be 12:00 p.m. Tuesday, February 13, 2018 at Mt. Tabor Baptist Church with Pastor Michael King officiating. Burial will follow in Blue Ridge Memorial Gardens. Friends may visit with the family one hour prior to the service.

Memorial contributions may be made to Mt. Tabor Baptist Church or Bowers Hospice House.

Arrangements by Calfee Funeral Home, Beckley.
To order memorial trees or send flowers to the family in memory of JoAnn Wells, please visit our flower store.