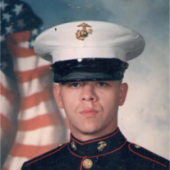 Jeremy was born on April 10, 1979 in Beckley, WV to Dennis and Donna Daniels Worley. In addition to his parents he leaves behind his brother and best friend, Matthew and his sister-in-law, Raygen Worley of Beckley and a daughter, Luma Surratt.

Jeremy was a 1997 graduate of Liberty High School. Not long after finishing high school, Jeremy enlisted in the United States Marine Corp and later the Army National Guard. He served a total of 10 years. Jeremy was stationed at Kaneoha Bay, Hawaii, South Korea and Okinawa, Japan. During his service, Jeremy had the honor of working alongside former President George H.W. Bush and former President William J. Clinton during the United States’ aid of the Tsunami of Indonesia. Jeremy did a tour of duty with Operation Enduring Freedom in Afghanistan where he ended his military career due to an injury he sustained. Jeremy was honorably discharged in January 2012.

Jeremy became a student of The Le Cordon Bleu Culinary Institute of Pittsburgh. He loved preparing dishes for family and friends. Jeremy spent his days playing music. He had a love for the drums that was only matched with his love for his cat, Callie.

A celebration of life for Jeremy Lee Worley will be at Cross Point Church in Beckley on Friday, February 15, 2019. The family will receive visitors beginning at 11:00 with services at 12:00. Anyone wishing to bring a favorite memory of Jeremy to share will be welcomed to do so. Reverend Dean Adams will be officiating. Burial will follow in Sunset Memorial Park with military honors.

Arrangements by Calfee Funeral Home.
To order memorial trees or send flowers to the family in memory of Jeremy Lee Worley, please visit our flower store.