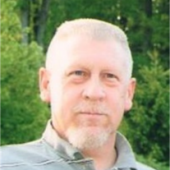 James Richard Fitzpatrick, 62, of MacArthur, passed away Wednesday, July 19, 2017 at Bower's Hospice House after a long and courageous battle with cancer.
Born December 13, 1954 in Beckley, he was the son of Wilma Ingram Fitzpatrick of MacArthur and the late James P. Fitzpatrick.
James was a self employed contractor. He had great pride and love for his family and would pick at or play with any child that came his way. He loved hunting and fishing especially with his daughter, Wendy. The greatest joy of his life was to see his daughter, Jamie receive her nursing degree. His favorite foods were ham, banana pudding and peanut butter milkshakes. James was a member of Crab Orchard Baptist Church and was an Eagle Scout.
In addition to his father he was preceded in death by his maternal grandparents, John William and Charlotte Ann Ingram and paternal grandparents, John Wiley and Ada Belle Fitzpatrick.
He is survived by his wife, Debra Fitzpatrick; daughters, Wendy and Jamie Fitzpatrick of MacArthur; sister, Charlotte Cook of Lewisburg, WV.
Friends may visit with the family from 5-7 pm Monday, July 24 at Crab Orchard Baptist Activity Center. Service will follow at 7:00 p.m. with Pastor Mike Sisson and Pastor Scott Dameron officiating. Interment will be 11 am Tuesday, July 25 at Blue Ridge Memorial Gardens and all are welcome to attend.
Pallbeares will be Greg Wood, Freddie Lilly, Eric Cook, Andy Cook, Cliff McGlothlin, Craig Canaday, Tim Jones, Ricky Moye. Honorary Pallbearers will be Roger Prince, Gary Gosnell, Joe Wills, Richard Radford, Alvin Jones, Tommy Darnell.