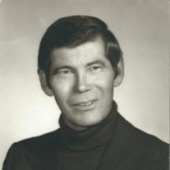 James Albert Kirby, 88, of Beckley passed away Friday, November 27, 2015 at Bowers Hospice House. Born March 15, 1927 at Covington, KY, he was the son of the late Frank and Wilma Calfee Kirby. In addition to his parents he was preceded in death by his wife Bessie Withrow (1977) and wife Mary Allen (2015) and brother Essie (1988).
James was retired from Appalachian Power Company with 42 years of service. He loved playing golf, coaching baseball and officiating football and basketball. He always considered all of the boys that he coached in baseball as part of his family.
He is survived by his children, James (Gale) of Fairmont, Theresa Patterson (Ron) of Meadow Bridge, Frank (Sandy) of Daniels, Kathryn Gobble (Gene) of Louisburg, NC, Stephanie Mackall of Indianapolis, IN, and sister Margaret Seiders of MO. In addition to his children, he is also survived by 12 grandchildren and 12 great-grandchildren.
He is also survived by two stepsons, Matt and Mark Mitchem and daughter-in-law, Missy Mitchem Lilly and their families.
A committal service will be at 1:00 p.m. Thursday, December 3, 2015 at Sunset Memorial Park Mausoleum B with Pastor Fred Lovell officiating. The family will receive visitors one hour before the service.
The family requests memorial contributions be made to Bowers Hospice House, 454 Cranberry Dr., Beckley, WV 25801.
Arrangements by Calfee Funeral Home, Beckley.
To order memorial trees or send flowers to the family in memory of James Albert Kirby, please visit our flower store.