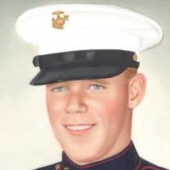 Harold Lloyd Miller, 76, of Coal City, passed away Thursday, June 11, 2015 at Bowers Hospice.
Born September 9, 1938 at Sullivan, WV, he was the son of the late William and Manota Harmon Miller. In addition to his parents he was preceded in death by a daughter, Lisa Miller; sisters, Mary Meredith, Betty Tramatanas, Ruby Holt and brothers, William Miller, Jr. and infant Walter Miller.
Harold worked 14 years at Slab Fork Coal Co. where he was known as “Slim” to his co-workers. He was an outdoorsman and enjoyed woodworking, hunting, and fishing. Harold was a veteran of the U.S. Marine Corps serving 2 tours of duty. He was a proud member of the UMWA
He is survived by daughters, Susie (Mike) Canterbury of Oceana, Lynette (Mike) Darnell of Coal City, Barbara (Eddie) Doran of Coal City a brother, Cecil Miller (friend, Kathy Auris) of Jumping Branch; sister, Rosalee Farley (Page) of Sullivan; grandchildren, Carrie Good, Tamra Dillon, Stephanie Dye, Amy Harper, Josh Darnell, Sasja Canterbury, Brittany Doran, Courtney Darnell; 9 great-grandchildren and one on the way; the mother of his daughters, Sandra Miller and his best 4 legged friend, Brutus.
Funeral services will be 1:00 pm, Monday, June 15, 2015 at Calfee Funeral Home Chapel with Daniel Harper officiating. Burial will follow at Pemberton Cemetery. Friends may visit with the family 2 hours prior to the service Monday.
Family and friends will serve as pallbearers.
The family requests that in lieu of flowers memorial contributions be made to the funeral home to assist with expenses.
Arrangements by Calfee funeral Home, Beckley.
To order memorial trees or send flowers to the family in memory of Harold Lloyd Miller, please visit our flower store.