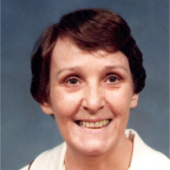 Goldie Mae Brammer of Rich Creek, VA, formerly of Beckley, went home to be with the Lord on January 10, 2016 after a long illness.
Born March 22, 1928 at Mabscott, WV, she was the daughter of the late Boone and Cora Rickman Brammer. In addition to her parents she was preceded in death by all of her siblings: brothers, Denzil, Ronald, Harold, James, Robert and Thomas; sisters, Evelyn Butler, Bessie Gravely, Madeline Brammer and Bonnie Floyd.
Goldie graduated from Woodrow Wilson High School and began her employment with C&P Telephone Co. as a switchboard operator. She later retired after 32 years of service. She was a member of First Church of the Nazarene where she served as a children's Sunday school teacher for several years. Goldie was devoted to the Lord and serving the needs of others.
She is survived by nieces and nephews.
Funeral services will be 1:00 p.m. Thursday, January 14, 2016 in the Calfee Funeral Home Chapel with Rev. Richard Wagoner officiating. Burial will follow in Calfee Cemetery at Mt. Tabor. Friends may visit with the family one hour prior to service on Thursday.
In lieu of flowers memorial contributions may be made to the Gideons, P.O. Box 713, Beckley, WV 25802.