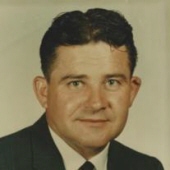 George Louis Hajash, 92, of Beckley died on August 28, 2012 at home following a long illness. Born on August 25, 1920 at Elbert, McDowell County, West Virginia, he was the son of the late Stephen and Rozi Tajti Hajash, Hungarian immigrants.

Mr. Hajash was a graduate of Woodrow Wilson High School, class of 1938. He was also a veteran of World War II having served in the Army in New Caledonia, New Hebrides, and Guadalcanal. He was one of eight sons of Stephen and Rozi Hajash, seven of whom served in different branches of the armed forces in World War II of which he was very proud. Mr. Hajash lived the early days of his life in Elbert, WV, later in Glen Morgan WV, and lived over 70 years in Beckley, WV.

Mr. Hajash was preceded in death by his wife Nancy Briguglio Hajash in 1988, one sister, Mary and six of his brothers, Joachim, John, Martin, Steve, Nick and Joe. He is survived by a daughter, Marlena Hajash Zsoldos and her husband, Phillip, and a son, Dr. G. Francis Hajash and his wife Patricia all of Beckley. Other survivors include one brother, Andrew of Largo, FL and two sisters, Rose Mary Fulford of Waycross GA, and Elizabeth Osborne and her husband Bob Osborne of Beckley. His surviving grandchildren include Robert J. Zsoldos and his wife Sonia of Columbus, OH, Andrew F-G. Zsoldos of New York City, NY, Christopher M. Zsoldos of Chicago, IL, and Alexandra K. Zsoldos of Charlotte, NC.

After working in the coal mining industry as a coal hauling contractor, he went to work at the U.S. Postal Services as a letter carrier and clerk. He retired in 1985 after 30 years of federal service. Mr. Hajash was a member of St. Francis de Sales Catholic Church, Knights of Columbus, Council 5657 Beckley WV, Loyal Order of Moose, Blue Jay Recreation Association, National Association of Letter Carriers, American Legion, and Disabled American Veterans. He also served in the Knights of Columbus as a volunteer at the VA Medical Center in Beckley.

A funeral liturgy will be 11:00 a.m. on Saturday, September 1, 2012 at St. Francis de Sales Catholic Church with Monsignor Samuel Sacus as celebrant. A rite of committal will follow in Sunset Memorial Park, Beckley, where he will be buried beside his true love Nancy. Friends may call from 6:00 to 8:00 p.m. at Calfee Funeral Home on Friday, August 31st. A scripture prayer service will follow at 8:00 p.m. with the Rev. Mr. Don Wise officiating. Members of the Knights of Columbus will serve as honor guards and pallbearers.