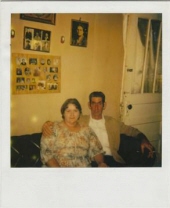 Emmogene Smith O'Neal of Beckley passed away Saturday Oct. 26, 2013 just 23 days before her 76'th birthday at the University of Virginia Health System of Charlottesville, VA following a short illness.

She was born Nov.18, 1937 at Norvel, WV to the late Joseph and Ethel Bowles Smith.
Mrs. O'Neal retired from Raleigh County Board of Education in Jan 2002 after serving 25 1/2 years as a Special Ed. Bus Monitor. She also worked at Valley and MacArthur skating rinks.

Funeral services will be Thursday Oct. 31 at 1 PM at the Wesleyan Chapel with the Rev. Glen Bragg, Jr. officiating. Burial will follow in Blue Ridge Memorial Gardens in Prosperity. Friends may visit with the family from noon until time of service on Thursday at the church.

In lieu of flowers donations may be made to the funeral home to help with the expenses.

Arrangements by Calfee Funeral Home, Beckley.
To order memorial trees or send flowers to the family in memory of Emmogene O'Neal, please visit our flower store.