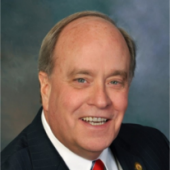 Emmett Swecker Pugh III, 67, of Beckley passed away peacefully on May 10, 2018 surrounded by members of his family and in the presence of the Lord. Emmett S. Pugh III was born on November 21, 1950 in Beckley, WV, the son of the late Emmett S. Pugh Jr. and Virginia Minter Pugh.
Emmett was educated in the Raleigh County School system and graduated from Woodrow Wilson High School in 1968 where he was involved in various extracurricular activities, including being a founding member of the infamous “Dirty Dozen” as well as trumpet player for the “Fabulous Red Barons” in which they won the First Tri State Battle of the Bands in 1967.
Following his graduation from Woodrow Wilson he enrolled in the University of Alabama where he received a Bachelor’s Degree in Political Science in 1973, with a specialization in state and local government. While there he also gained a love of the Alabama Crimson Tide which would stay with him the rest of his life.
Upon graduation he returned to Beckley where he began his professional career as President of Bowl-Wick, Inc. and served in those capacities until 1987.
Emmett’s career in politics began in 1979 where he served as Councilman-At-Large City of Beckley until 1988 where he was appointed Mayor and served until his retirement in 2013. Emmett was the longest serving Mayor in Beckley’s history, loved Beckley and it’s citizens, and achieved many accomplishments and accolades during his tenure. Among those were the 2009 (YMCA Southern West Virginia) Spirit of Beckley, Lifetime Achievement Award by the West Virginia Municipal League, where he served as President three times, served on the Board of Directors for the United Way of Southern West Virginia as well as the Beckley Area Foundation, Mayor of the Year 1988, West Virginia Municipal League Quiet Strength Award, Paul Harris Fellow Beckley Rotary Club, and many other awards and recognition throughout his career that are too numerous to list.
Emmett’s effort to make Beckley a better place to live and work have been recognized on both state and local levels by bringing in several projects to the Beckley area including the Beckley Intermodal Gateway, Beckley Exhibition Mine Interpretive Vision Center, the Pinecrest Business and Technology Park, and the Beckley Z-Way Highway Project. His vision for Beckley and his love of his family will last for generations to come.
Left to honor his legacy is his wife Linda Moran Pugh of Beckley, WV; son Emmett S. Pugh IV “Charlie” and his wife Bridgette of Chesapeake, VA; daughter Julie Pugh Morton and husband Chad of Birmingham, AL; son Michael Weston Pugh and fianc Amy of Beckley, WV; step-daughter Charity Laney Patterson and husband Michael of Beckley, WV; step-daughter Stephanie Laney DiBiagio and husband Tony of Pittsburgh, PA. Emmett is also survived by a brother, Lex Pugh and his wife Robin of Charlotte, NC; sister Beth Livingston and husband Rutledge of Hendersonville, NC. He also leaves behind eight grandchildren: Sara, Mason, Carolyn, Christopher, Jackson, Andrew, Reece, and Emilia.
A celebration of his life will be held on May 15, 2018 beginning at 1:00 PM at the Raleigh County Armory. Reverend Ken Wright will conduct the service. Visitation will be on May 14, 2018 from 5:00 PM until 8:00 PM at the Raleigh County Armory.
Memorial contributions may be made to the Beckley Area Foundation, 129 Main St., Suite 301, Beckley, WV 25801