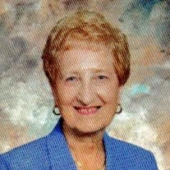 Elizabeth Ann “Scotty” Scott
Liz began her eternal life on Friday, April 25, 2014 after a long and terrible battle with Alzheimer’s disease. She was 83 years old. She began her earthly life on February 2, 1931 at Stanaford, WV as the daughter of the late Robert and Annie McCartney Scott. She was the last remaining sibling and the baby of the family.
She was preceded in death by brothers: James, John, William, Robert, Thomas and Jerry Scott. Her sisters that preceded her were Agnes Fox and Margaret Scott with whom she lived. She also was preceded by her sister-in-law, Catherine Scott, who lived with her for 45 years and her nephew, Robert Lee Scott.
Elizabeth graduated from Woodrow Wilson High School in 1948. She started work on her eighteenth birthday at Appalachian Power Company as a secretary in Stores, where she was known as Scotty. She always told everyone she loved working with all men. She retired after 45 years of service.
She was active in retirement. She volunteered as a Pink Lady at Beckley Appalachian Regional Hospital for over 30 years. She was active in Well I Bee and Senior Friends.
Liz was a member of Stanaford Missionary Baptist Church, where she loved being a member of the choir and the Men’s and Ladies’ Bible Class. She truly loved her church family.
She is survived by nieces: Peggy Lawhun, Betty Weaver, Mary Ann Scott, Barbara Crump, Catherine Anne Scott and nephews: John, Tom, Robert, Mark and Stuart Scott. Great-nieces and nephews: Lori and Heather, who helped with her care, Thomas, Rob, Allison, J.R., Bobby and Katie. Great Great-nieces and nephews: Hadley, Cooper, Aiden, Addison, Jared, Brianna, Peyton and Parker, Liana and Alex. She also had many wonderful friends.
The family would like to thank Johnette Walker, the staff at Greystone and Hospice for their help with her care.
Funeral services will be 11am Monday, April 28, 2014 at Stanaford Missionary Baptist Church with Pastor George Wood officiating. Friends may visit with the family on Sunday, April 27, 2014 from 6-8pm at Calfee Funeral Home and one hour prior to the service. Burial will follow at Sunset Memorial Park.
Memorial contributions may be made to The Alzheimer’s Association, P.O. Box 96011, Washington D.C. 20090-6011 or March of Dimes Attention: DRFR 1275 Mamaroneck Avenue
White Plains, New York 10605
Online condolences may be left at www.calfeefh.com.
Arrangements by Calfee Funeral Home, Beckley.
To order memorial trees or send flowers to the family in memory of Elizabeth Ann Scotty Scott, please visit our flower store.